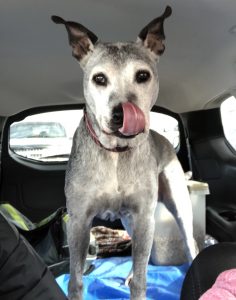 Samba’s Magic CarPet Ride began in Brooklyn on Friday January 31 and ended in Los Angeles on Tuesday Feb 4. The trip planning starts a day or two before with a conversation with Samba’s family to discuss what to expect on the journey. Samba’s Mom shared a photograph of a pensive Samba wondering what is about to happen in her life. 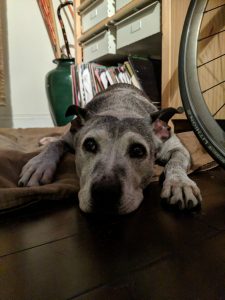 What is going on Mom?

Day 1: Brooklyn, NY to Springfield OH. The day begins at 7AM with Brian meeting Samba and Kamaya and packing up the car.Samba made herself comfortable in the back of the car, taking full advantage of being a VIP passenger. Our first stop was in Pennsylvania, there she had a walk, a sniff and tucked into her on board spring water. Six hours in the drive we made our second stop in West Virginia. After exploratory sniffs and a walk we were onward towards Ohio. In Ohio we made our way to the hotel for dinner and a good night’s rest. 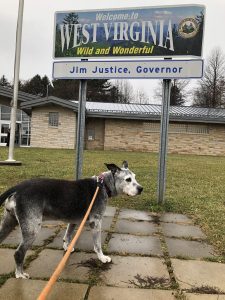 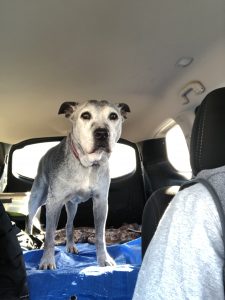 Samba checking out her space in the van.

Day 2: Springfield OH to Oklahoma. Off to a very early start, Samba was ready to continue her road trip after a very restful night. Our first stop for the day was in Indianapolis, by now we have become a great team and have found our rhythm. Once we were in Illinois we felt it was a perfect place to visit for our second break, which meant Samba had now crossed her 7th state on her cross country adventure. What a view as we crossed St Louis, continuing our journey westward towards Samba’s new home. Posing for a picture on Route 66 is the iconic thing to do for this road trip expert. OK, we are in Oklahoma! Samba checked herself in for the night and staked her claim on her queen size bed. 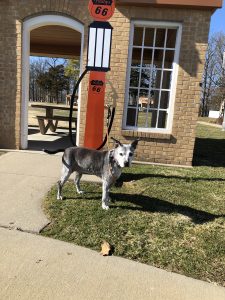 Samba getting her kicks on Rte 66! 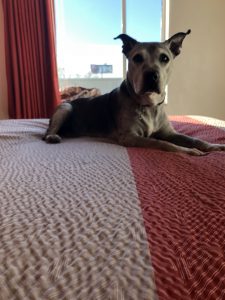 Samba claiming her side of the bed.

Day 3: Oklahoma to New Mexico. Texas waits for no man and no dog, so we said a pre-dawn good bye to OK and headed for a Texas sunrise. It was our good fortune to greet the day in Shamrock, Tx. Moving along swiftly, Texas was in our rearview and New Mexico would soon enchant us with a welcome stretch and sniff. There’s always something new to experience, like say, a metal cactus!!?? Now we were on the chase, Samba wanted to make it to Alburqueque in time to watch the Super Bowl. Since Samba is going to be a Cali-girl soon, she is cheering for the 49ers. 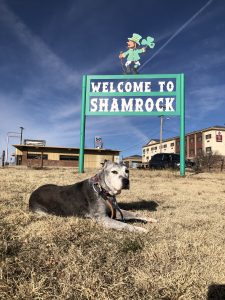 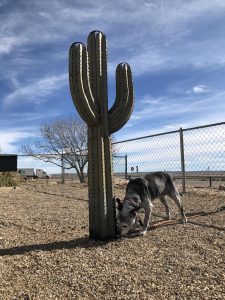 Day 4: New Mexico to California. It’s a road trip so let’s take in the sites, Samba kicked off her morning with a visit to the Petrified Forest National Park in Arizona. Arizona is state number 12 for Samba’s journey, she’ll definitely have many stories to tell her new friends in California. For example, the one about when she made MCR history.While Brian and Samba were making the coast to coast sojourn, Kevin Carlson (one of our team members) was simultaneously driving from the west coast to the east coast with Sufi the German Shepard. Right there in Parks, Arizona they met up and we had to document this celebratory magical moment. Spurred on by all that excitement Brian and Samba continued onward to the Pacific Time Zone. And then there it was, the first signs of the Golden State. One more sleep and Samba will soon be reveling in the ultimate reunion. 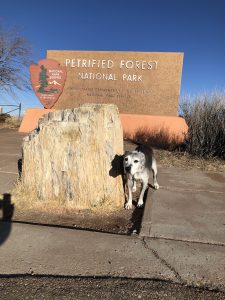 Petrified? It does not even look nervous says Samba. 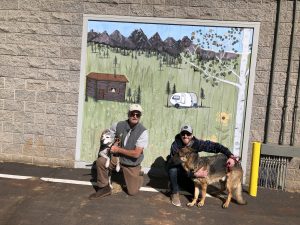 Samba was part of Magic CarPet Rides history with our two cross country moves meeting up in Parks , AZ.

Day 5: Reunion Day. Bags are packed and “home” is plugged into the GPS. Wind in her hair and California dreaming, Samba cruised into Hollywood and kept her red carpet smile ready for her Mom and Dad. Here’s where we say good-bye sweet Samba, we’re so glad you’re reunited with your family and it was our greatest pleasure to share the road with you. 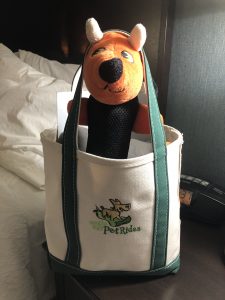 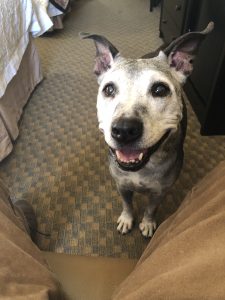 Samba’s big smile says she knows what is going on today! She will be reunited with her family! 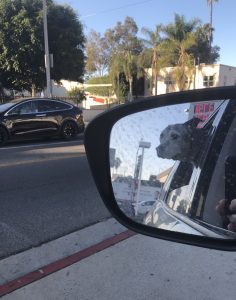 I love this so much! Thanks for taking good care of her!